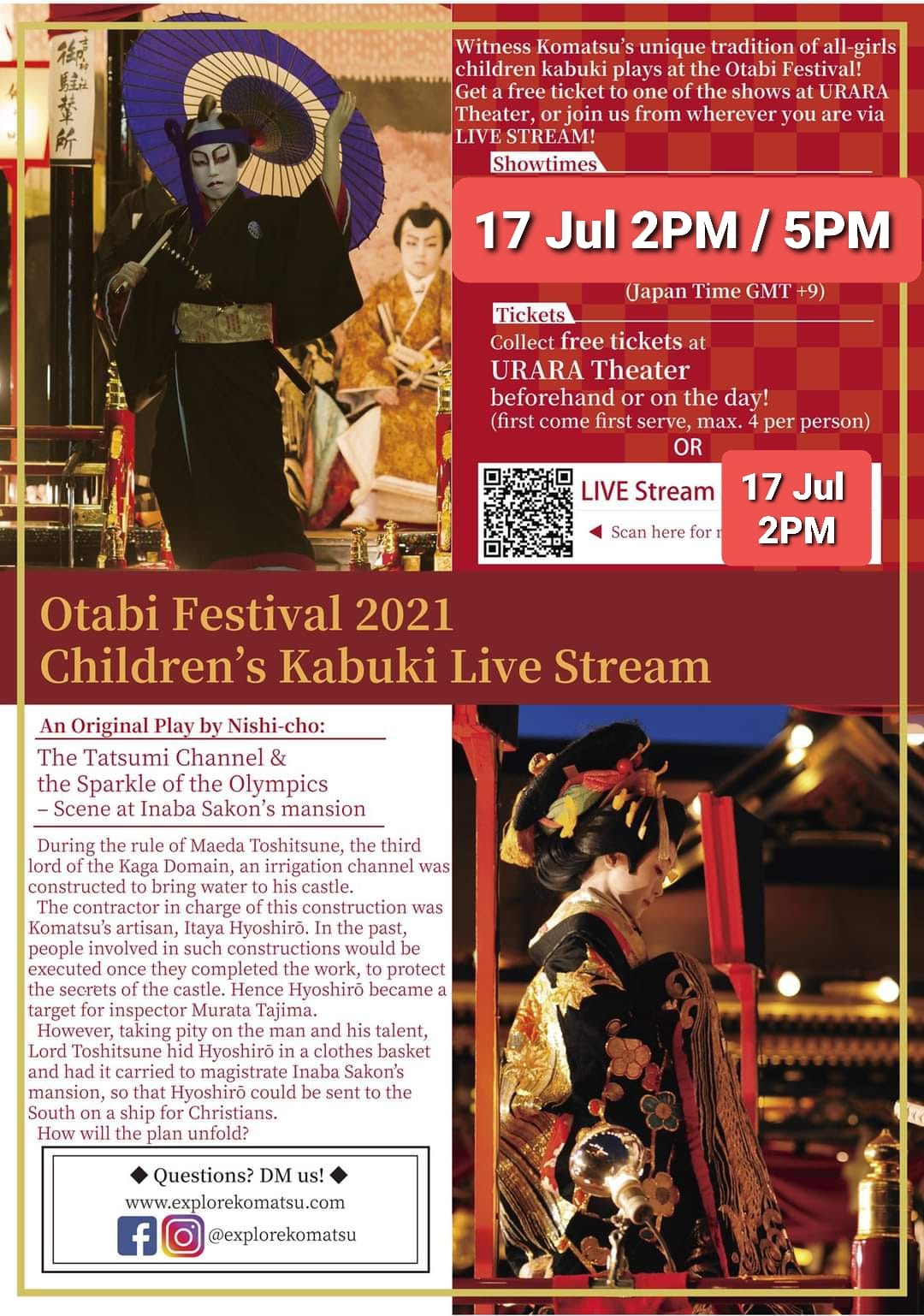 As a City of Kabuki, Komatsu has an enduring tradition of staging children’s kabuki plays, hardly seen elsewhere in Japan. One of the best times to witness these plays is during our biggest annual event in May, the Otabi Festival.

The plays could not happen in May this year due to the COVID-19 situation, but it has now been postponed to 17 July (Sat)!

Guests are restricted to Hokuriku residents as part of corona safety measures, and free tickets may be reserved at URARA Theater by phone (0761-20-5500) or directly at the counter!

On top of that, we are doing something special this year:

sharing the performances with friends from all over the world through LIVE STREAM!

The Story:
The Tatsumi Channel and the Olympic Sparkle – Scene at Inaba Sakon’s Mansion

an original play, by the neighbourhood of Nishi-cho in Komatsu

During the rule of Maeda Toshitsune, the third generation ruler of the Kaga Domain, an irrigation channel was constructed to bring water from the Tatsumi area to his castle. The craftsman tasked with this construction was Komatsu’s stone mason, Itaya Hyoshiro. It is said that in the past, people involved in such constructions would be executed once they completed the work, in order to protect the secrets of the castle. Hence Hyoshiro became a target for inspector Murata Tajima. However, taking pity on the man and his talent, Lord Toshitsune hid Hyoshiro in a clothes basket and had it carried to Magistrate-General Inaba Sakon’s mansion, so that Hyoshiro could be sent to the South on a ship for Christians.

In the opening scene, Murata Tajima visits the mansion of Inaba Sakon, who had been Hyoshiro’s supervisor for the construction. Murata is received by Sakon’s daughter, Tokiwa, and he proceeds to interrogate her on the whereabouts of Hyoshiro, who had apparently disappeared upon completing the construction, right after paying his respects to Lord Toshitsune. When two servants arrive carrying a large clothes basket, Murata interrogates them as well and presses them to let him check the basket’s contents, but to no avail.

After Murata leaves, Tokiwa retreats to Sakon’s side, who is in anguish over the unfortunate plight of Hyoshiro. Tokiwa then reveals that she is actually pregnant with Hyoshiro’s child.
Just then, Murata returns to press Sakon on Hyoshiro’s whereabouts, followed by Hyoshiro’s mother, Ofuki, there to defend her son’s name and assert that he did not run away in cowardice. Unable to convince Murata, Ofuki decides to take some drastic measures, setting off a chain of unexpected revelations… 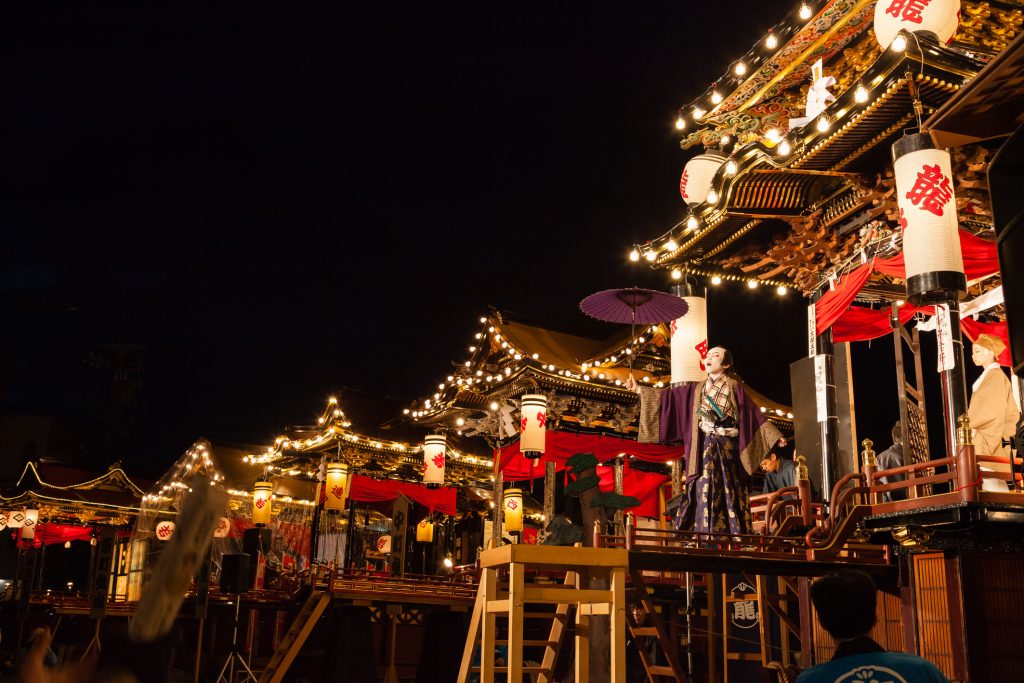 Komatsu is one of the few cities left that have continued the theatrical tradition of kabuki. Among our many kabuki events, the most extravagant is the 250-year-old annual Otabi Festival.

However, the stars of the Otabi Festival plays are not men, as typical of mainstream kabuki. Quite the opposite actually: they are our local elementary school girls!

Furthermore, they are staged not on wide stages, but the narrow platforms of hikiyama, festival floats unique to Komatsu. Hidden within these hikiyama are pull-out hanamichi walkways, an important element of kabuki stages.
It is the eight neighborhoods of Komatsu that still possess hikiyama that take turns staging the Otabi plays each year!

Performing this time after months of gruelling training are the girls of Nishi-cho neighborhood. While the hikiyama will not be featured this time due to covid concerns, we hope the moving community spirit and resilience of our people will still be conveyed through the passionate performances of our girls.

And if the live stream impresses you, we hope you can join us here some day to experience the raw vibrance of both kabuki & hikiyama!